I have been tasked with defining what exactly is CHAMP.  We have a problem of trying to explain to people what it is we do here.  The short answer is “We are a public work space that provides tools and space for people to build what ever it is they want to build.”  But what exactly does that mean?  I figured I would answer that by telling a story. 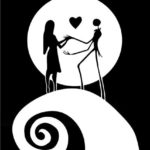 m NOT an artistic kind of person.  Ok I have ideas but when it comes to painting / drawing, I am very lacking in skills.  My wife is a big fan of the movie “A Nightmare Before Christmas” so I decided I would like to make her something to hang on the wall.  I found the picture I wanted to use. (Jack and Sally on the right) Now here is my problem.  I am not able to draw this and paint it.  So what do I do?

To explain this I have to take you on a trip back to the first year of CHAMP.  We decided we wanted a 3D printer.  We made a full sized arcade and raffled it off to pay for it.  Over the 3 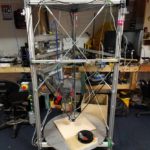 years of having the 3D printer, I figured out how to create things in a 3D environment so that I could print them.  I also learned how 3D printers work.  So much in fact we have built several of them here at CHAMP.  (pictured left) 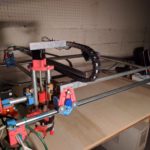 Since we built a 3D printer, we decided to build a mini  “Mostly Printed CNC” we found on thingiverse.com.  We spent several days printing and printing parts for this thing.  We got it all put together and figured out the software to make it work.  This included learning how to design and create files for the CNC.  We took the CNC to First Fridays downtown and a couple of the Maker Faires.  We would load up chalk or dry erase makers and just let it draw.  See where I’m going with this?  Nerds who can’t draw can build robots that draw.  (see pic on right.) 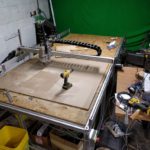 After making the little CNC a decision to make a GIANT 5′ x 9′ CNC. (pictured Left)  Brian did not purchase a kit.  Instead he just started designing based on other designs he saw on the internet.  After spending a small fortune and months of time designing and building.  The CNC is ready to go.  We had to spend a couple days figuring out the new software and troubleshooting some problems.  Then it was time to test.  The first tests went pretty good and we decided to push the machine and give it a long run.  So I decided to make a picture for my wife. 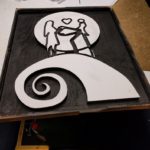 So that’s how I made a wall hanging for my wife and how I explain what CHAMP is.  I set out a little goal and ended up with a massive amount of information.  If you want to learn.  This is the place for you.